Here is my review of Vi waterproof wireless headphones for runners after running with them more than 226 miles, some 46 hours. In a nutshell: Vi AI is a FAIL!

I was an early backer on kickstarter and paid $199 for an estimate January delivery. I received my Vi in April.  This Kickstarter campaign had more than 7,000 backers and raised almost $1.7 million dollars fund this development. 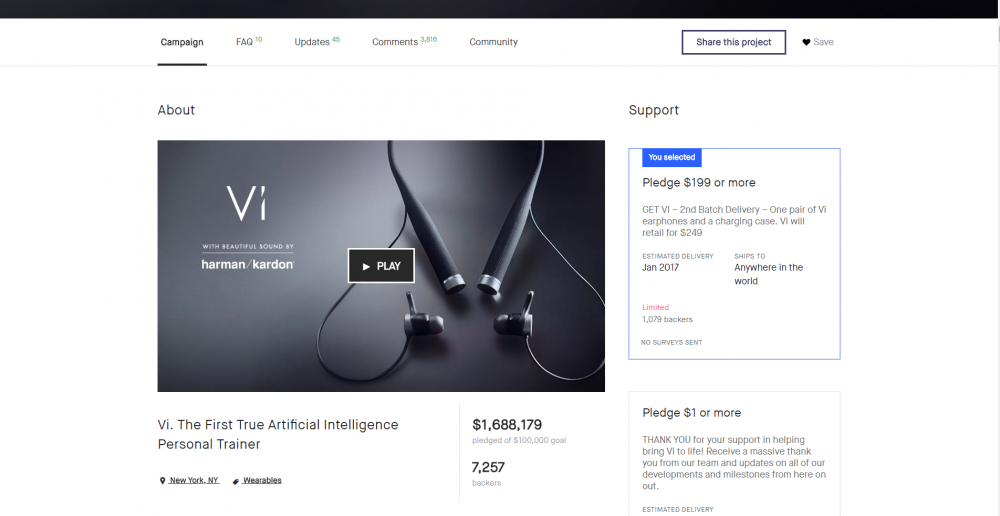 The kickstarter campaign had regular updates just about once a month. These mostly covered design work, and rework. They conveniently never mentioned the slip until after the delivery date had been missed. I’m really not sure what they did with the $1.7M but it clearly did not go into software development. On the first release the iOS App was garbage, light on features, and full of bugs. The Vi app continues to be buggiest software I’ve used in years. Check out the couple of thousand complaints on Kickstarter.com.  The funding didn’t go into hardware design either, as they had already worked on a similar product the JBL/Under Armour Sport Wireless Heart Rate Earbuds.

There are many excellent waterproof earbuds for runners on the market, so I’ll skip that part of the review, other than to say these sound just as good at my LG earbuds that cost 1/2 as much.

What’s unique about these earbuds is 1) the “voice centric experience”, and 2) the “Artificial Intelligence Personal Trainer”.  But the implementation of both of those features is a joke.  A HUGE stretch of the truth.

OK, lets talk about “voice centric” first. How much of a vocabulary would you expect a voice activated running assistant to have? One the manufacture refers to as “Siri and Alexa’s super-fit cousin“? Maybe a 1000 words or even more? Hundreds of words/terms at a minimum. Well, the reality is Vi only knows about 12 words or phrases and she does not know them very well. If you do not says the command phrase exactly correct she will not understand you.

That’s the input side – it sucks. Now the output side, which is simply pre-recorded sound clips.  The Vi Team decided to use canned pre-recorded audio so Vi sounds like a real person. What’s wrong with this approach is it sounds like a broken record the more you use it, not Artificial Intelligence. Somewhere between the 3rd or 5th or 10th time hearing a clip, I can’t stand it any more. After many hours of running with Vi hearing the same clips over and over and over and over again she becomes super annoying. I prefer she say nothing until I ask for “heart rate” which is one of the things she can do right (if you say the phrase exactly as she wants it)

Lets talk AI Running Coach. I’ve never had a personal trainer or running coach, but I have 40+ years of running experience (I’m in my 50’s now). I would expect my coach to give me advice based on where we are running, what I’m doing, or doing wrong. That’s not what Vi does. Vi grabs a sound clip at random and plays it. This is something like the Woody doll from the Toy Story movie saying: “Someone poisoned the water hole” with a canned pre-recorded sound clip. It’s just a random clip. “Hey Kim, you should avoid running on concrete… bla bla bla” when I’m running on single track mountain bike trails miles from a road. That’s just one example, but this happens every few runs where the “couching” does not match my location or what I doing wrong.  A lot of what Vi says isn’t couching anyway, it’s just random attaboys like “Hey, good job Kim“, and “I like what I see here”

I’ve never experience a product where the marketing and reality were so different. Check out this video of Vi from Kickstarter. Hear the conversation between Vi and the runner?  That’s super cool huh? Ya, I REALLY want that too. But that’s vapor wear. Vi doesn’t do that, even now more than a year after the Kickstarter release.

You hear Vi respond to questions like “Am I on Pace”, and “Am I in my zone” in conversational language? Vapor ware! Promised but never delivered.

When Vi came out the internet was flooded with reviews from professional bloggers. I’m sure many of them just posted the canned text provided by Vi.  I’m also willing to bet none of them used Vi than a few miles.  What they loved about  Vi was the novelty of something talking to you, and what they believed Vi could do. Yes, It is great to be able to say “heart rate” and get your number.  But, you will quickly want more stats like “cadence”, and “zone”, that Vi just does not know even though the app has the data (like cadence) or could calculate it (like zone).  You will find my comments on many of those early blog posts, but after a while I gave up correcting them. Just too many to keep up with.

Check out some of the Vi product reviews on Amazon. Skip to the 1 and 2 star reviews. Many runner in there confirm what I am saying here.

Anyway, Vi. “The First True Artificial Intelligence Personal Trainer” is a Fail, a really bad coach, and the most moronic voice assistant I have ever used!

Kimball is a website designer and developer in Goffstown, NH.